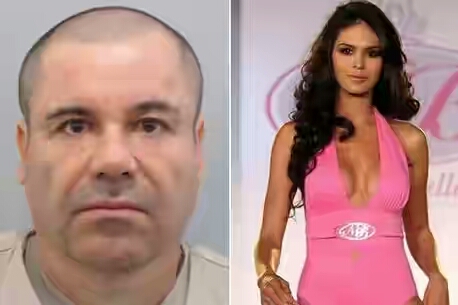 The glamorous wife of mexican drug lord Joaquin “El Chapo” Guzman is crying foul after prison authorities cut her love-making time with him. Guzman is going mad without sleep and sex in prison, according to his lawyers and doctors. He is said be suffering depression, hallucinations and memory loss in the tough conditions in Ciudad Juarez jail.
The revelations come after his wife, US citizen Emma Coronel, filed a complaint with the National Human Rights Commission that her husband may die or "go crazy", The New York Post reports. This included, she added, a claim that authorities had been too tough on her lover, cutting his "weekly love-making time with her from four hours to two", The Post said.

El Chapo has claimed guards are inflicting him with "psychological torture", it was said, saying that he would have preferred that they beat him instead.

His lawyer Attorney José Refugio Rodríguez claims Guzman "felt he was going to die".
Posted by dubem naija blog at 11:15 am