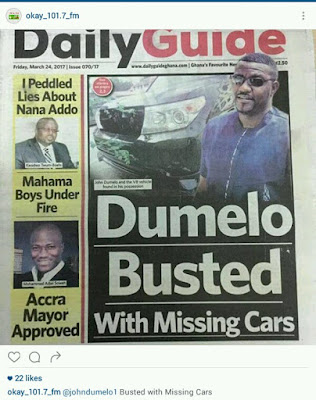 Top Ghanaian actor John Dumelo appears to have landed in trouble after he was allegedly caught with a state vehicle by government agents.According to reports,the vehicle is a Toyota Land Cruiser V8.The vehicle was said to be one of the 200 vehicles the presidency says are missing. See pictures of the car below.. 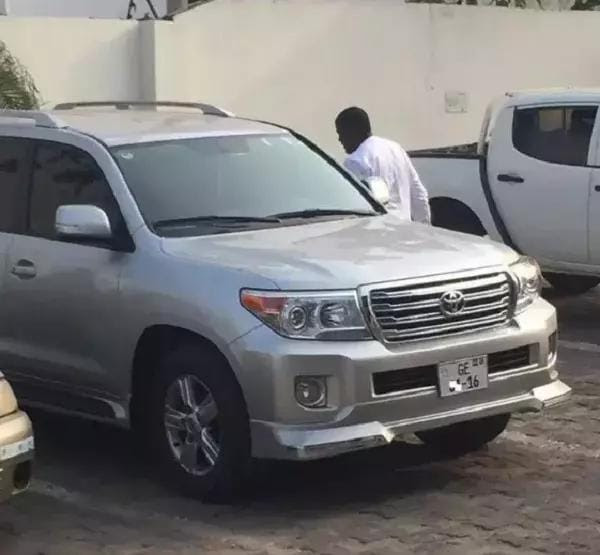 John Dumelo was caught with the vehicle at a spraying shop in Accra where he had allegedly taken it to be resprayed.According to reports,he initially said that the former first lady, Lordina Mahama, gave him the vehicle. Then he reportedly changed his tune, saying that he bought it himself.However, a look at the car's chasis number (VIN number) is said to have given him away.He reportedly handed over the car without any resistance.


Last year,the star actor was spotted cruising around with a Toyota Land Cruiser car.However,it is unclear if it is the same vehicle that was seized by government agents.

It should be recalled that John Dumelo was an ardent supporter of former president John Mahama ahead of the December election.Alongside Nigerian Dele Momodu and others,he travelled across the country campaigning for Mahama, who eventually lost to Nana Akufo-Addo of the New Patriotic Party (NPP).At a time he was at a loggerhead with star actress Yvonne Nelson because she was against Mahama's administration.
Posted by dubem naija blog at 11:32 am