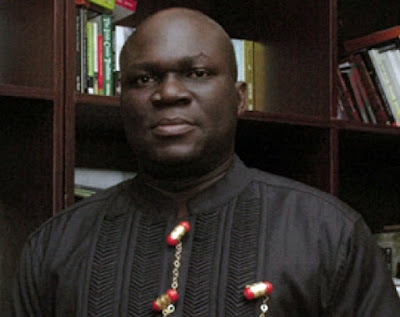 One week after he was arrested by the Economic and Financial Crimes Commission (EFCC) for allegedly collecting N50m from the former National Security Adviser (NSA) Sambo Dasuki, former presidential spokesman Reuben Abati is still in the gulaq. Premium Times reports that Abati is still being detained by the EFCC because he has been unable to fulfil the conditions of the administrative bail granted him by the anti-graft body.
The conditions include depositing his passport with the EFCC and presenting a senior federal civil servant preferably a director with landed properties in Abuja.

When operatives questioned him about how he spent the funds, Mr. Abati reportedly said he
disbursed it to media practitioners in his capacity as the spokesman for the Goodluck Jonathan administration. But he said he did not keep records of the disbursement when queried for evidence. “He will be released when he meets his bail conditions,” a source within the EFCC said.

Also in EFCC custody is Bala Mohammed, a former Minister of the Federal Capital Territory, who was taken into custody shortly after Mr. Abati’s arrest on Monday.

But Mr. Mohammed’s case is said to be more complicated, and he may not be released anytime soon. It was learnt that the EFCC has procured a remand order from a court to hold Mr. Mohammed for a while.

He faces allegations of land racketeering which EFCC said came in several petitions from citizens who dealt with Mr. Mohammed while he was a minister.

Mr. Mohammed was said to have sold government land to private individuals and received pay for the transaction in cash.
Posted by dubem naija blog at 11:17 am