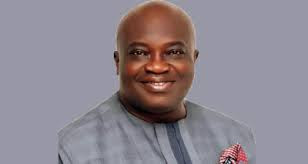 The headmistress of a primary school at Amaetiti Asaga Ohafia, in Ohafia Local Government Area, Abia State, Mrs. Maryleen Ezichi, has been reportedly demoted to a classroom teacher for allegedly embarrassing the wife of Abia State governor, Nkechi Ikpeazu. It was gathered that Ezichi has been transferred to the Ukwa-East Local Government Area — about 140 kilometers from her former school — to serve as a deterrent for her ‘impunity and lack of respect for constituted authority’.
The headmistress, it was learnt had, during an interactive session with Ikpeazu’s wife after the
inauguration of her free meal programme for primary school pupils in her school, complained that ‘teachers were being owed several months of salary arrears and allowances’.
Ezichi was quoted to have told the governor’s wife that teachers had been finding it difficult to meet their financial obligations like the payment of house rents, school fees for their wards, medical bills, transport fares and had pleaded with her to intercede on their behalf.

It was gathered that two days after, the embattled Ezichi was whisked away to Umuahia from the school, where she was handed a letter of deployment and instructed to proceed to the new station immediately.

While defending the headmistress, one of her colleagues, who spoke on condition of anonymity, queried the appropriateness of the government’s action, maintaining that if the government felt embarrassed by her appeal it should do the needful.

He said, “By the way, of what importance is the meal programme to the pupils in particular and the schools in general? What about other schools in the community? All we are saying is that the government should pay us our entitlements period.”

In January, the state’s wing of the Nigeria Union of Teachers had embarked on an indefinite strike over their six-month salary arrears, non-payment of leave allowances and non-implementation of their promotions.

Reacting to the development, the Chairman of the state’s NUT, Chizobam Akparanta, stated that he was not aware of the incident, adding that if the teacher complained about it to the union, the NUT would look into it.

When contacted, the Public Relations Officer of the state Ministry of Education, Chris Ogbuehi, denied any knowledge of the matter even as he insisted that he was not in the position to speak on such a sensitive matter without the permission of his boss.

The Chief Press Secretary to Governor Okezie Ikpeazu, Enyinnaya Appolos, said the information made available to him by the Commissioner for Education, Prof Ikechi  Mgbeoji, had it that there was no such incident in the state.

He added that the state would investigate the allegation to ascertain what truly happened.
Posted by dubem naija blog at 8:47 am