Nollywood actress, Ruth Kadiri shows off brand new car presented to her by a man 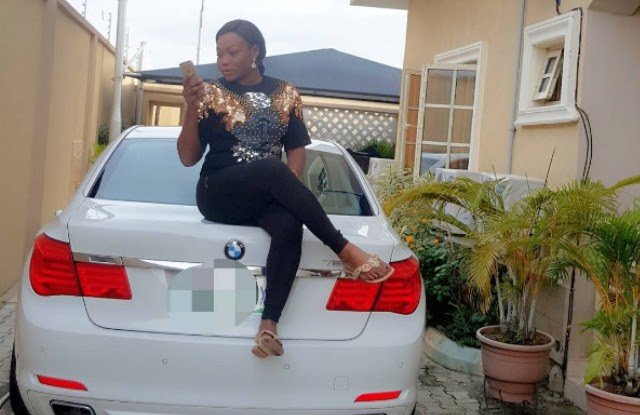 Nollywood actress/producer, Ruth Kadiri showed off the surprise brand new BMW gift car from her bae. The actress shared picture of herself sitting on the new BMW car, while gushing about her love for her man.

Ruth Kadiri recently made a fierce statement on the cover page of House Of Maliq’s by stripping down to a Nood lingerie, took to instagram to flaunt her latest ride. Captioned: “Love u muncho.” with a love emoji.


The actress who confirmed she is in a relationship with a UK based man, reportedly acquired a 24 million naira Range Rover in 2015 but she didn’t disclose who bought her the car.

Ruth during the interview as well dismissed the rumour about the acquisition of her Range Rover reportedly worth N24 million bought for her by her married lover.

‘It was just a presumption from a blogger, apparently turned out to be true that I bought a Range Rover, but the person is not even my boyfriend. That’s what I am saying about unconfirmed reports.’

The actress and producer is set to release her latest movie ‘Memory Lane’. Memory lane will be hitting cinema in November. The much anticipated movie featured Nollywood A-listers like Uche Jombo, Ghanaian actor Toosweet Annan, Okey Uzoeshi among others and directed by award winning filmmaker,Pascal Amanfo, popular for movies like “House of Gold,” “Single and Married,” “Family Album,” “Single Six,” among others.

Posted by dubem naija blog at 8:43 am