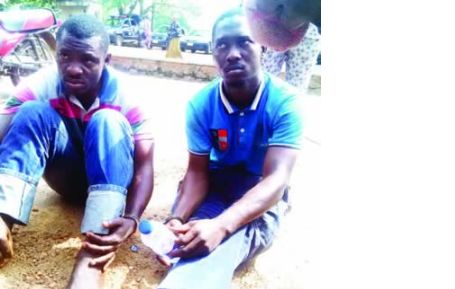 The Police in Oyo State have arrested a former officer of the Federal Road Safety Corps, FRSC, who killed an official of the FRSC in Oyo town. The suspect, Nurudeen Alin (32), and his accomplice, Mohammed Garba (26), went to the residence of their victim, Yahuza Fakai, at College Road, Amejiogbe area of Oyo town and stabbed him with a knife several times.

The state Commissioner of Police, Samuel Adegbuyi, who paraded the suspects, said investigation revealed that Ali was dismissed from the FRSC for driving licence touting offence, stating also that the victim had on many occasions supported Ali with money after he lost his job.

He said, “The victim and Ali were friends and after Ali was dismissed, he got a lot of financial help from Fakai. On October 14 this year, Ali and an accomplice, Garba, went to Fakai’s house and stabbed him to death. The Atiba police division was mandated to unravel the murder, leading to the arrest of the suspects. The murder weapon, a knife, was recovered from them.”

Ali, who confessed to the crime during an interview, said his late friend had promised to give him some money but delayed in doing so, which was what made him angry and attacked him.

“Fakai was my friend because we worked together at FRSC before I was dismissed. He had been helping me until I killed him. A day before he was killed, he called me and gave me some money. He also said that I should see him again for more money. I went to his house with Garba but when we got there, I needed to receive a call and stepped out, by the time I returned to the house, Garba had stabbed him in the neck. He handed the knife to me and I also stabbed him. We left him for dead. I was later arrested in my house by the police,” said the suspect.

Giving the account of his involvement in the crime, Garba said the deceased had promised to assist Ali but delayed the assistance after learning that he was hugely indebted.

He said, “Our aim was to threaten him with the knife so that he could release the money but after stabbing him in the neck, I realised that the injury was life threatening so I left the scene because I was afraid. Ali stabbed him more leading to his death. I had never met the deceased before that day.”
Posted by dubem naija blog at 2:18 pm