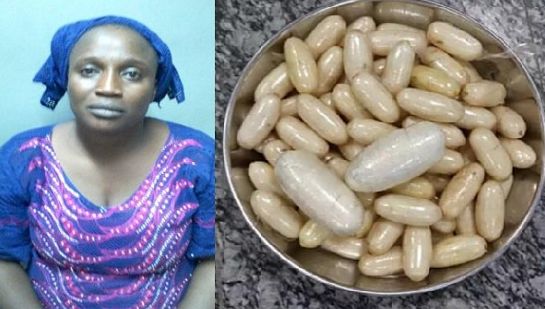 Here's an update on the female pilgrim nabbed by NDLEA operatives. The 55 year-old woman who was arrested by National Drug Law Enforcement Agency NDLEA last week, at the Nnamdi Azikiwe International Airport Abuja, has excreted the last wrap of cocaine she ingested.

The suspect, Mrs Binuyo Basari Iyabo who has been under observation reportedly expelled 82 wraps of cocaine weighing 931grammes which street value is estimated at N10 million.


The suspect according to the agency’s commander at the Abuja airport, Hamisu Lawan, was arrested during the outward screening of passengers on an Emirate flight to Dubai en-route Medina, after testing positive for drug ingestion.
She was on her way to Medina, Saudi Arabia on pilgrimage.
Posted by dubem naija blog at 8:42 am