How my father was killed rescuing Emefiele’s wife - Son 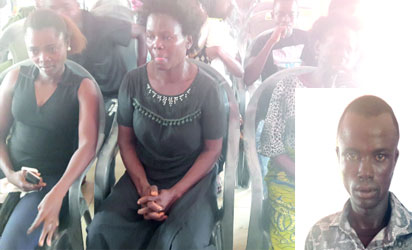 From left, late Okorare’s two wives in black and his daughter and son
It was a pitiable sight last Wednesday, October 26th, when vigilante members from Emuhun community in Uhunmwode Local Government Area of Edo state who rescued the abducted wife of the Central Bank of Nigeria governor, Mrs Margret Emefiele,  stormed the Nigeria Union of Journalists’ (NUJ) secretariat in Benin city alongside the family of one of their members, Mr Gabriel Okorare, who lost his life during the rescue operation.
They came lamenting that the corpse of their deceased member had been abandoned at the mortuary by the police while the family members the deceased left behind have also been left to their fate.

Late Okorare is an indigene of Delta State but lived in Emuhu community with his eleven children and two wives before his death.

Saturday Vanguard learnt that following an appeal from the police that the vigilante should comb the bush in search of Mrs Emefiele and three others who were abducted with her by the kidnappers, the deceased mobilized his men and during a shootout with the kidnappers, he was shot dead.

However, this did not deter his colleagues and some farmers who were said to have helped in locating the place she was kept and in fact assisted in ferrying the ransom to the area the kidnappers demanded the money should be kept.

Recalling the sacrifices their breadwinner made before Mrs Emefiele was rescued, the two wives, the eleven children and other members of the family wept uncontrollably as they felt abandoned. They also expressed disappointment at the Edo state Commissioner of Police, Mr Gwandu Haliru

Abubakar, who promised to pay a condolence visit to the family of the deceased but never kept to his promises. Eldest son of the deceased, Roland Okorare, in his speech said: “we are still in shock because we were at home when we heard that our father was shot dead by the kidnappers when they went to rescue the wife of the CBN governor Mrs Emefiele.

We went to Ugoneki police station and the police admitted that they knew about his death, that they actually called members of the vigilante to comb the bush that day in pursuit of the kidnappers of the wife of the CBN Governor. All our vigilante men went into the bush and as they were exchanging fire with the kidnappers my father was shot. The police took his body to Abudu mortuary. We left there for Okhuai police station and the police said they were contacting the DSS and the Police command on the matter.

When they did not give us concrete response, we went to Benin to see the police commissioner who told us that he was also aware of the matter. But unfortunately, the police have abandoned the corpse at the mortuary, they are not bothered about how he will be buried or the welfare of the family he left behind. We have not also heard from the Emefiele family.

“We did not hear from the police and we believe that the police did not even give the report of how one of the vigilante men lost his life. The kidnappers abducted that woman, took her to Igumoso bush where my father confronted the kidnappers and was shot dead. The police did not know the bush where the woman was kept. Emefiele’s wife was still in the bush when this happened, in fact it was a farmer and one of our men who brought the woman out after the kidnappers ran away and we handed her over to the police at about 2 am.

Emefiele family also promised to come and pay a condolence visit to us and we are still expecting them. My father has eleven children, most of them can no longer go to school now and all the promises from the police have not been fulfilled. I don’t know if it is now a crime to assist people who are in distress” he lamented.

The elders of Emuhun community led by Great Omoruyi, on their part said it would be the height of ingratitude to abandon the family of the deceased. According to him, “it was the police who put a call across to us that we should come and help out immediately they kidnapped the woman and three others. They told us that the kidnappers ran into the bush and we should help. So we mobilized our vigilante men. The police told us that they were kidnapped at Ugoneki area along the Benin Asaba express road. The late Gabriel Okorare was one of the vigilante members who volunteered to join forces with security operatives. Unfortunately, Okorare, a hero, crime fighter, was shot dead by the kidnappers and his lifeless body was recovered by the police who were equally involved in the same rescue operation.

The police deposited the corpse at Abudu hospital mortuary. It may interest Nigerians to know that the deceased who was the bread winner of his family left behind eleven children, two wives, aged mother and brothers and sisters. Since his death, the feeding and the general welfare of the family have been a major challenge to the community of Emuhun. The situation has forced the children of the deceased out of school.

We are using this medium to appeal to Mr Godwin Emefiele, his wife Margret, Governor Ifeanyi Okowa of Delta state, Comrade Adams Oshiomhole of Edo state, our revered father, the Oba of Benin Kingdom, and others to come to our aid to enable the children of the deceased survive this shocking death of their father.

“The report of late Okorare’s death was lodged at Okhuaihe police station while the family has also been interviewed by the Edo state Police Commissioner who promised to convey the matter to the appropriate authority but he had not done son and also failed to pay a condolence visit to the family of the deceased”. All efforts to reach the Edo state CP for his comments proved abortive while the Police spokesman in the state, Stephen Onwuche, who promised to get back to Saturday Vanguard, failed to pick his calls.
Posted by dubem naija blog at 2:22 pm