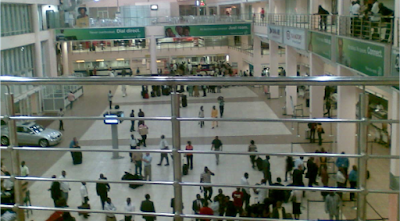 A 45-year-old man, Mr Lawrence Agbe, has been arrested at the Murtala Muhammed Airport for allegedly being in possession of 1,250,000 euros, about N274 million, suspected to be fake.


The Commissioner of Police, Airport Police Command, Mr Fredrick Lakanu, while dropping this hint on Monday, stated that Agbe was arrested while boarding a flight at the international wing of the Murtala Muhammed Airport (MMA), Lagos en route Abuja to an unspecified destination.

According to Lakanu, in the course of police investigation, a search warrant was executed by a team of detectives from the Domestic Airport Division to search the suspect’s printing press in Agege, Lagos, where over 2,000 police statement forms were recovered.

The CP added that on further interrogation, the suspect mentioned one Steve residing in Abuja, now at large, as the owner of the said 1,250,000 euros. Meanwhile, the CP also disclosed that the command has impounded over 30 motorcycles, popularly known as ‘okada,’ and about 35 touts at various parts of the airport.

He stated that those arrested had been charged to court to court for unlawful entry, touting and other similar offences. Lakanu appealed to members of the public for cooperation to checkmate the activities of undesirable elements at airports across the country.

Also speaking, the Police Public Relations Officer (PPRO), Assistant Superintendent of Police, Livinus Chukwuma, solicited the cooperation of the media towards ridding airports of touts and commercial motorcycle operators from the airport.

The media, he stated, has very important role to play in tackling the menace of touts, Okada riders and other illegal activities airports.

Posted by dubem naija blog at 9:12 am