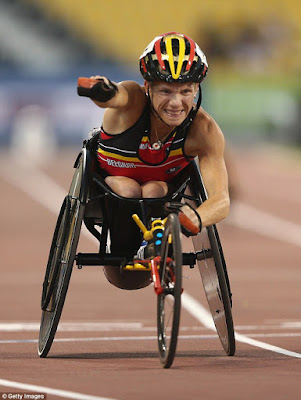 Belgian Paralympic champion Marieke Vervoort has made it clear that the Rio Paralympics will be her last - then she'll plan her final days on earth. According to the Adelaide Advertiser, four years ago, the 37-year-old wheelchair athlete who has an incurable spinal degenerative disease won gold in the 100m sprint in her T52 class, and silver in the 200m.

Now, it has worsened to the extent she is considering euthanising herself following the Rio carnival, which begins tomorrow. In French newspaper Le Parisien, the decorated sportswoman has revealed her daily agony that has her contemplating the heart-wrenching decision to take her own life. She said “Everybody sees me laugh with my gold medal, but no one sees the dark side,”  “I suffer greatly, sometimes sleeping only ten minutes a night — and still go for the gold. “Rio is my last wish. I train very hard even if I have to fight day and night against my illness. I hope to finish my career on a podium in Rio. 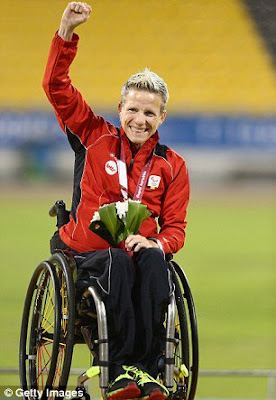 “There is a chance to medal, but it will be very hard because the competition is very strong “Then we’ll see what life brings me and I try to enjoy the best moments.”
The newspaper claims a combination of fatigue from sleepless nights and the agony of her condition means Vervoort faints regularly at home, woken only by her dog licking her face.

Euthanasia was legalised in Belgium in 2002, with the written consent of three doctors. Vervoort has drawn up a “bucket list” but is not understood to have confirmed her euthanasia decision. She was paralysed in 2000 when struck by a rare disease.
Posted by dubem naija blog at 12:24 pm