We support you, just that our strategy changed, APC tells BBOG 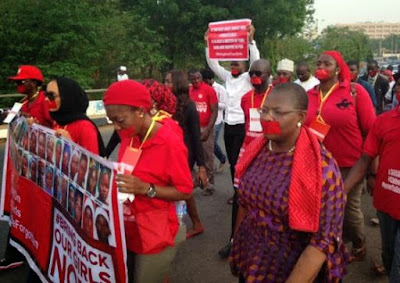 The ruling All Progressives Congress has reacted to the apparent drift in the relationship between the Federal Government and the #BringBackOurGirls (BBOG) group. Responding to a tweet by a leader of the BBOG, Oby Ezekwesili, suggesting a volte face by President Muhammadu Buhari on the issue, the APC said it remains committed to BBOG’s struggle but has only changed its strategy since it is now the party in power.

Before the May 2015 presidential election, the APC was a powerful voice behind the group’s campaign for the rescue of the over 200 Chibok school girls abducted by the extremist group, Boko Haram. The then opposition party made the missing Chibok girls a campaign issue against the Peoples Democratic Party, PDP.

Now in power and the girls still not rescued, APC’s relationship with the campaigners has become frosty.

The BBOG members were on Tuesday prevented by the police from marching to the Presidential Villa, Abuja.

Miffed by the development, Oby Ezekwesili, a former minister of Education, and a leader of the BBOG, took to Twitter on Friday to remind President Muhammadu Buhari that it was 879 days since the Chibok girls were abducted.

The APC, in its response to Ms. Ezekwesili, said it is committed to the BBOG’s struggle, but that its strategy has changed since it is now the party in power.

“As opposition then, #BringBackOurGirls was an open campaign, since that was the only way we could pressure government into action,” the APC tweeted.

“However, as leading party, our strategy changed. We’re most concerned with actual efforts to rescue the girls and our efforts are evident.”

The party said the BBOG leader would agree that Mr. Buhari’s administration is succeeding in its war against insurgency.

“Dear @obyezeks, we respect your resilience and commitment to the #BringBackOurGirls struggle and would do anything to encourage you, Ma.

“As a party, we’ll continue to work with government and security forces, as much as legally allowed, until they #BringBackOurGirls.”