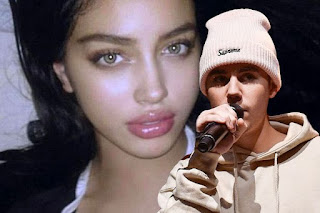 The mystery girl Justin Bieber reached out to on Instagram has apparently responded, saying she doesn't "know how to deal with this". The Sorry singer asked fans to help him track down the stunning brunette after he spotted her picture on Instagram.

“OMG who is this!” he wrote alongside the snap he shamelessly shared with his 47 million followers.
And now the girl, whose Instagram name is 'wolfiecindy', has finally spoken out.

"I so do not know how to deal with this but I only have Instagram and tumblr so whatever other stuff people are finding is fake (I did used to have a twitter account but I deactivated)," she wrote.
Posted by dubem naija blog at 5:57 am