EFCC accuses man of swallowing $115,000 at the airport, Charged to court 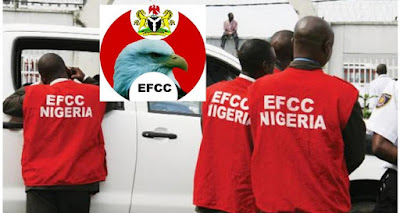 One Onwuasonya Augustine was charged to court on Tuesday by the EFCC for allegedly swallowing $115,000 to avoid declaring it to officials of the Nigeria Customs Service at the Murtala Muhammed International Airport in Lagos.


He was arraigned along with five other alleged accomplices, Christian Okoli, Kingsley Nwokenta, aka Buchito, Nwokenta Emmanuel, Ezenwa Ikenna and Ezenwa Uzoma for the offence of money laundering

The six were charged with four counts before Justice C.J. Aneke of a Federal High Court in Lagos.
The agency alleged that Onwuasonya and the 5 others committed the offence on August 25, 2015, and  were apprehended at Room 303 of a five-star hotel in Lagos.
The sixth accused, Uzoma, was singularly charged with the offence of obstructing an NDLEA official, Bello Tsanya, in the discharge of his duty.
However, when the charges were read to the six accused in court, they all pleaded not guilty.
The prosecutor said:
“In view of the plea of the accused, I respectfully pray the honourable court for a trial date to enable us bring our witnesses. However, I will also be praying that the accused persons be remanded in prison pending trial.”
But the counsel for the 1st to 5th accused, Mr. Victor Opara, told the court that he had filed bail applications on their behalf stating that the 2nd defendant had health challenges, which were being treated while he was in the custody of the EFCC.
He asked the court to remand all the accused in EFCC custody so that they could have easy access to treatment and lawyers.
Justice Aneke adjourned till December 11, 2015, to take the bail applications of the accused and ordered their remand at the Ikoyi Prison.
Posted by dubem naija blog at 6:05 am