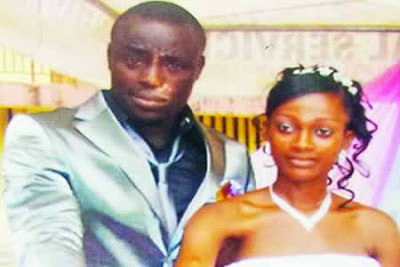 29-year-old businessman, Oluchi Ajimowu, has been arrested by the State Department for Criminal Investigation, Yaba, Lagos, for his alleged involvement in the death of his wife, 23 year old Priscillia Ajimowu. The couple lived with their children in Festac, Lagos before the wife's demise.
The police think that Ajimowu either slammed his wife’s head on the floor, or the mother of two poisoned herself due to frustrations in her marriage.

Ajimowu claims that he had locked his wife in her room on November 29, seized her phone and went out with their two children, after they arrived from their outing, he reportedly met his wife foaming in the mouth.
His wife who was a nurse had asked to be taken to the hospital, but he allegedly refused, instead he gave her palm oil and recorded her with his phone for about 40 minutes until she died.
It was gathered that prior to her death, Ajimowu had battered and subjected the deceased to inhuman treatment throughout the four years they spent in South Africa.
They decided to relocate to Nigeria. Ajimowu arrived four months ago while the wife arrived on November 27, two days before her death.
It was gathered that Ajimowu had put their house for sale shortly after the wife’s death.
The couple’s oldest child, seven-year-old Ella, said that there was a pesticide and a drink in the room where her mother was on the fateful day, adding that her father was “not nice to my mother” while they were in South Africa.
Posted by dubem naija blog at 9:13 am