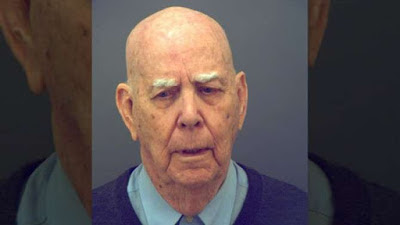 A 91-year-old man was arrested for killing his wife of over 60 years in the bedroom of the Texas retirement home where they lived. He reportedly wanted to end the woman’s suffering. Nelson Harvey on Saturday allegedly shot and killed his 93-year-old wife, Evelyn, who had been suffering from a terminal illness, according to reports.


Harvey allegedly reported the death of his wife to caretakers at the Monte Vista at Coronado retirement center and gave them the firearm, El Paso police said.


Harvey told a home health care worker doing a daily check on the couple around 8 a.m. Sunday that his wife “had passed away but he did not provide any details,” the El Paso Times reported.

Thinking that the woman had died from her illness in her sleep, the worker left.

A supervisor who checked in on the man at 11:3 0 a.m. discovered Evelyn Harvey lying in her bed with a gunshot wound to the back of the head, according to the paper.

Harvey, who was found sleeping on the couch in the room, “informed them that the victim had died during the course of the night and made reference that he was tired of her suffering so he shot her,” the Times wrote.

He reportedly told court officers that he has no family and that his only friends at the retirement home are in their 80s or older.

Harvey was arrested by El Paso police on suspicion of murder and was jailed under a $25,000 bond.
Posted by dubem naija blog at 9:04 am