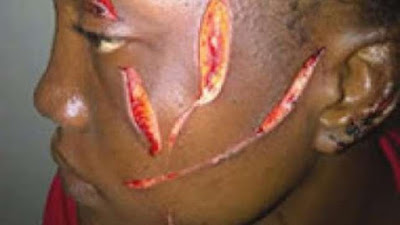 A 22-year-old daughter of a senior police officer serving in Lagos State, Mary Atiake, has been remanded at the Kirikiri Prison by an Ejigbo Chief Magistrates’ Court for inflicting severe injuries on the face of another woman, Sarah Ogunyemi, for sleeping with her boyfriend identified simply as Joe.


It was gathered that Atiake met Ogunyemi in her lover’s house at Olowo Close in Igando area of the state and a fight ensued between them over the young man, resulting in her picking up a razor blade and lacerating her rival’s face.

Those close to the lover boy reveal that Joe had been going out with Atiake for over a year but along the line, he also started going out with Ogunyemi but always denied he had anything to do with her anytime Atiake confronted him.

So on the fateful day, she went to his house early in the morning unannounced and met the new girl in a nightgown, still sleeping.

She then went out to buy the blade and during the fight, brought it out and attacked the rival.
The victim was said to have bled profusely from her wounds and was rushed to the Igando General Hospital for treatment while the matter was reported at the Igando Police Division and Atiake was arrested.

She will be in prison custody till July 29, 2015, when her case will be heard. But in a twist, another close friend of the randy Joe says he has since dumped the two warring women for another woman.
Posted by dubem naija blog at 3:43 pm