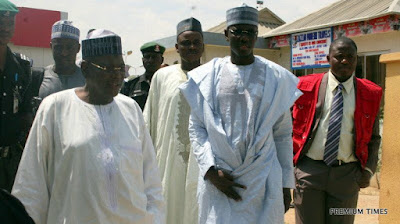 A federal court has ordered a former Jigawa State governor, Sule Lamido, and his two sons, Aminu and Mustapha, accused of fraud, remanded in prison custody in Kano till September 28. The former governor was arraigned on Thursday alongside his children for receiving N1.35 billion kickback from a government contractor.


The money was allegedly paid into accounts controlled by the governor and his sons. The Economic and Financial Crimes Commission is accusing the four suspects of money laundering, amongst other charges. They were due for arraignment Wednesday, but the court appearance was rescheduled to Thursday (today).

Security was stepped up around the court vicinity in Kano ahead of the hearing Thursday. Delivering a ruling, Justice Evelyn Anyadike ordered that the four accused persons be remanded in a Kano Prison Custody because the EFCC said they lacked enough facilities to accommodate them.
She rejected the pleas of defence counsel, Effiong Effiong, SAN, that the accused be kept at EFCC custody, saying the commission had complained of inadequate facilities. Twenty eight-count charge bordering on a number of alleged breach of trust by Sule Lamido, Aminu Sule Lamido, Mustapha Sule Lamido and one Aminu Wada Abubakar, was read in court. They pleaded not guilty after the charges were read to them.

The judge ruled that the accused persons be remanded pending the hearing of their bail applications.
Earlier, the defence counsel, Mr. Effiong, had argued that remanding the accused persons in prison would amount to trampling on their fundamental human rights. He pleaded they be sent to either of EFCC facilities in Abuja or Kano. However, the counsel to the EFCC, Chile Okoroma, objected to the plea, saying EFCC facilities were full to capacity both in Kano and Abuja.

The case was adjourned to September 28 for ruling on bail applications. There was pandemonium in court between those supporting Mr. Lamido and those against him, leading the police to fire teargas canisters into the air to disperse the crowd. Mr. Lamido, his sons and Mr. Abubakar are accused of using their positions to siphon Jigawa State funds.

PREMIUM TIMES had in 2014 reported how a construction firm, Dantata and Sawoe, paid N1.3 billion as 10 percent kickback for contracts it won, into accounts owned by the governor and his sons.
It also showed how, between 2007, when Mr. Lamido assumed office, and 2014, Dantata and Sawoe Construction Company was awarded contracts amounting to N13.5 billion.

The state government made payments for the contracts to the construction firm through five banks, Zenith, Access, Diamond, Sterling and UBA. Within the same period, according to a probe of the transactions by the EFCC, Dantata and Sawoe paid out over N1.3 billion into the accounts of companies in which the governor and his sons had interest.