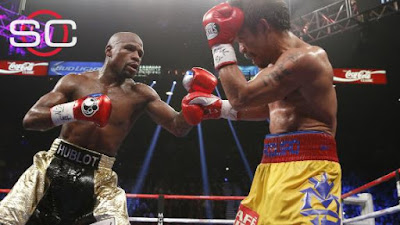 Floyd Mayweather JR has been stripped off his WBO welterweight title by the welterweight world title organization for failing to comply with their rules and regulations.

Mayweather defeated rival Manny Pacquaio on May 2 to take the welterweight world title.The Mayweather vs Manny pacqauaio fight was the fight of the century which attracted a lot of attention from viewers,celebrities and other high profile people.


He was expected to pay $200,000 as sanctioning fee for the May 2 match.The deadline for the payment was on Friday(3rd July 2015)but Mayweather refused to pay his sanctioning fee and he left welterweight world title organization with no option than to strip him off his title.

The WBO world championship committee is allowed no other alternative but to cease to recognize Mr. Floyd Mayweather Jr. as the WBO welterweight champion of the world and vacate his title for failing to comply with our WBO regulations of world championship contests
the WBO wrote on Monday.
Posted by dubem naija blog at 10:43 am