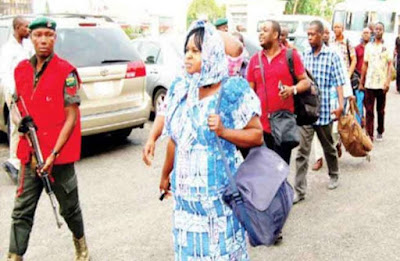 Justice Olayinka Faaji of the Federal High Court, Ibadan Division, has been told that one of the suspects in the N8bn mutilated currency fraud suit, involving staff of the Central Bank of Nigeria and other commercial banks, has been diagnosed as having a in the heart.

Yakubu Ruba, who is the counsel for the suspect, Dolapo Oni, told Faaji that his client was diagnosed with hypertensive heart disease at the University College Hospital, Ibadan, and was unable to make it to the court because of ill health.

He produced a letter from the hospital, stating that the hospital had no facility to treat him immediately. Ruba also made an oral application, praying the court to allow his client to be transfer to Lagos for treatment.

Oni, Afolabi Olunike, Ademola Adewale and Omotosho Abimbola, who is now at large, are standing trial for economic crime involving N1.7bn.
They are being prosecuted by the Economic and Financial Crimes Commission.

But Justice Faaji frowned on the counsel oral application, saying since he was not informed that Oni was being taken to the hospital for treatment and diagnosis by the prison management, there was no point seeking his approval for hid transfer to Lagos.

Ruba told journalists after the proceeding that his client deserved the best treatment to stand a chance of continuing the trial.

He said, “My client is seriously sick with a hole in the heart in prison custody but the court insisted that we should come properly and unfortunately, the court is going on vacation today until around September 15 before the court resumes.”

Also on Friday, Justice Faaji ruled against the prayer of one of the counsel for the accused persons to withdraw from the case on the ground of bias.

The counsel for two of the suspects, Olalekan Ojo, had appealed against Justice Faaji’s ruling, which turned down his bail application for his clients.

Ojo had also urged the judge to hand off the case, arguing that Justice Faaji’s pronouncement, while denying the bail application, showed that he had presumed the accused guilty before hearing the case.

The counsel also called for a stay of proceeding pending the determination of the Appeal Court on the bail application.

While Justice Faaji granted the stay of proceeding, he however ruled out disqualifying himself from the case.

Delivering his ruling in the case which involved Kolawole Babalola, Olaniran Adeola, Toogun Philip, Isaac Akano, Ayodele Adeyemi, Oyebamiji Akeem, Ayodeji Aleshe and Ajiwe Adegoke, the judge said, “I therefore grant the prayer of the motion filed on June 26, 2015 as prayed since the appeal, relating to charges FH/IB/32c-34c, is pending summons application. This motion applies to the three other charges.”