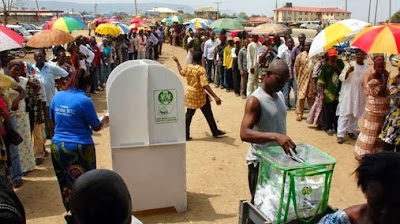 The Independent National Electoral Commission (INEC) has fixed the governorship elections in Kogi and Bayelsa States on November 21and December 5 this year.

This was disclosed on Friday in a public notice signed by the commissions Chairman, information and voter education committee, Dr. Chris Iyimoga, after the commission met on Thursday.
According to the public notice, “the governorship election in Kogi is scheduled to hold on Saturday 21st November, 2015, while that of Bayelsa shall be on Saturday, 5th December, 2015.
“Formal notices of the elections shall be issued on or before the 23rd of August, 2015, and 5th September 2015, respectively, in accordance with the provisions of the Electoral Act, 2010 (as amended).

“Campaign by political parties shall commence on 24th July 2015 and end on 19th November 2015 in Kogi and 6th September, 2015 terminating on 3rd December, 2015 in Bayelsa.
“Political parties are to note that campaigns outside these periods are unlawful and violators are liable to prosecution.

“The political parties and aspirants are to further note that the conduct of the party primaries to nominate candidates for election shall be between 25th August and 15th September 2015 for Kogi and 7th and 30th September, 2015 for Bayelsa State, while the last day for submission of the list of candidates (CF002) and the personal particulars of such candidates (CF001) for governorship and deputy governorship candidates, shall be 14th November, 2015 (Kogi) and 7th October, 2015 (Bayelsa).

Elections were not conducted in both states during the last general elections because the tenure of the governors have not elapsed.
Posted by dubem naija blog at 8:51 pm