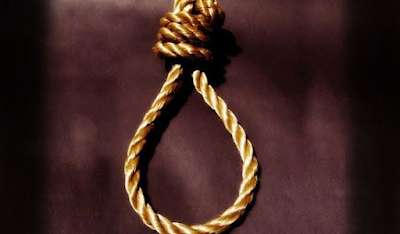 A 48-year-old landlord and father of three identified as one Popoola Adepoju committed suicide in Ayegbami Zone 7 area of Idi Ose in Ibadan, Oyo State. The body of Adepoju was found dangling from the ceiling of his room where he had reportedly hanged himself with a rope tied to the ceiling fan. According to Daily Trust, the deceased, a former staff of defunct National Electric Power Authority(NEPA) sent his children out of the house before hanging himself.

His wife, who was also not at home at the time of the incident told the investigation police officers that her husband was disengaged from NEPA at Abeokuta two years ago, but had not been paid his entitlements. He had been engaged in small scale cement sale to sustain himself and family since then.

The deceased left a three-page suicide note which some members of the family refused to release to the police. The note was later released to the general chairman of the Idi Ose community, Chief Taiwo Alimi JP.

Chief Alimi later led the community members and the deceased’s relatives to the Akanran Police Division where the Divisional Police Officer (DPO), Aliko Dankoli (CSP), directed that the corpse be buried as requested.

The deceased was buried in his compound amidst tears and anguish wailing by family members and and sympathiser.