PERV caught on video taking photos up a woman’s skirt 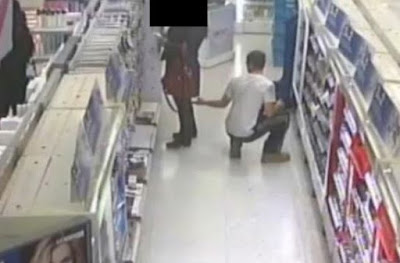 A man was caught on CCTV taking photos up a woman’s skirt in a a store. According to the police, the incident happened in a branch of the high street chemist in the Tandem Centre, Colliers Wood, south London. The Scotland Yard today, December 11 launched an appeal to trace the man.


The force said the man was caught on CCTV pretending to browsing the aisles before targeting the woman as she shopped. The man said to be in his 20s then looked around before crouching down to hold his phone between the victim’s legs as he takes a photo.
Despite being challenged by a security guard who demanded he delete the photos, he was allowed to leave the store. Police said the suspect was described as a slim, white man, 6ft tall with short brown hair and blue eyes.
Posted by dubem naija blog at 3:06 pm