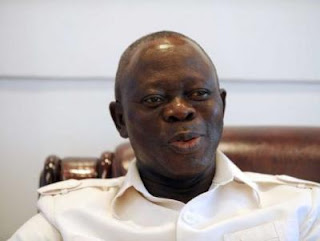 Governor Adams Oshiomhole of Edo State says his administration is owing only four years of unpaid pensions after settling nine years pensioners’ entitlements. Oshiomhole told State House correspondents in Abuja on Thursday that contrary to the allegation by the opposition, he was not leaving behind a huge liability for his successor. The opposition Peoples Democratic Party (PDP) in Edo had alleged that the present administration’s failure to pay pensioners’ arrears might cripple the incoming administration in the state.

“So, we found a pension bill of 13 years, arrears of gratuity and pension not paid by the PDP government including the 7,000 people they dismissed.

“When I assumed duties at the end of 2008, I had two options. There was this temptation to say that I would be paying those who retired during my tenure.

“But, as a former labour leader, I asked myself that if an employer was so callous to carry out massive retrenchment of workers as the PDP did by sacking 7,000 and permanent secretaries and did not pay them gratuity, is it the fault of those workers?


So, I accepted the fact that government is a continuum.

“So, I have paid pension arrears of 13 years even though I have been in government for only seven years plus.’’

The governor, who maintained that having cleared 10 years pension and gratuities arrears, assured that his administration would settle part of the outstanding four years pensions before handing over power to a new government. (NAN)