Baby discovered in the waste pipe of a tour bus 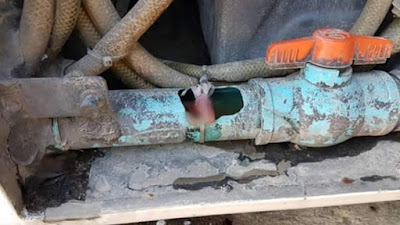 A baby was recently discovered by a cleaning staff of Phitsanulok tour bus while trying to extract sanitary towels and tissues from a waste pipe. The discovery which happened on September 20th put may in shock as two little feet belonging to the fetus of a boy aged about four to five month was discovered.
The baby was removed from the pipe after police and medics arrived at the scene.

Further investigations by police also revealed that eats C12 and D12 had blood on them.

The seats were registered to the same name and police are now in the process of contacting that person to see if they are involved.
Posted by dubem naija blog at 1:27 pm