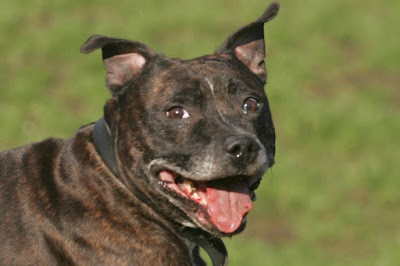 A dog owner mauled to death by his Staffie was being interviewed by the BBC at the time. The 41-year-old man died after being bitten on the neck at his home in Wood Green, North London, police said.
A BBC spokesman told Sky: "We are aware of an incident but we cannot comment any further as it's an ongoing investigation." The victim's cause of death was recorded as hypovolemic shock and damage to the airway consistent with a dog bite after a post-mortem.

Police were called to the house at 10:25pm last Monday but the man was pronounced dead at hospital in the early hours of the following day.

The dog was seized by officers and remains in secure kennels.
Posted by dubem naija blog at 9:01 am