Men steal $6M worth of Jewels on new year's eve 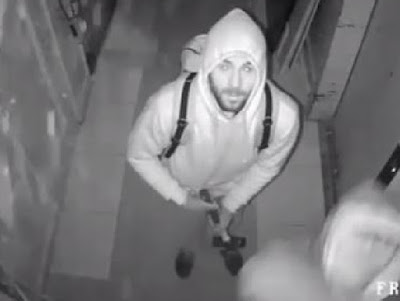 A TRIO of New York City burglars waited until the stroke of midnight to steal $8 million worth of jewellery in a spectacular New Year’s Eve heist. “They laid in wait until the ball dropped,” a law-enforcement source told the New York Post.
The three hooded and masked men broke into a West 36th Street jewellery wholesaler at 12:01am. Sunday in what appears to be an inside job while 7,000 cops were distracted protecting Times Square revellers just a few blocks away.

The source said the thieves “100 per cent” planned the heist to coincide with the ball drop.

They made off with around US$6 million (A$8.31 million) in gems and are still at large, police sources said.

The burglars were caught on video inside Gregg Ruth, a commercial jewellery store known for its rare yellow and pink diamonds. One of the robbers, a bearded white male in a hood without a mask, looks straight into the camera during the heist, CCTV surveillance footage shows.

They came in through a freight entrance to the sixth floor business and then used a hammer and crow bar to break a lock, gaining access to a room containing four safes, sources said. The gloved suspects removed diamond-encrusted and 18 carat gold bracelets, earrings and necklaces from two of the safes. The safes were either already open or the burglars knew the combination, stuffing the pricey merchandise into several backpacks, sources said.

The two unopened safes contained another estimated $7 million in merchandise, sources said. The lockboxes were on loan to the wholesaler, who was in the process of building a more secure vault.

The footage shows one of the suspects talking on a cell phone while he is opening the safe, perhaps receiving the combination from a fourth person, sources said.

The trio then fled down a stairwell in the beige, 16-story office tower that lacks any exterior signage about its sixth-floor tenant.

“It’s weird to me that they randomly tried that floor in this building. How would somebody know to come here? That’s real fishy” a building worker told The Post.

“It definitely seems like an inside job,” the worker said.

“The timing is weird too,” he said, adding that the thieves likely knew the business would be empty when they broke in.

The break-in was reported at 3pm. Sunday.

Another building source agreed that the burglars seemed to be “aware of their surroundings.”

“They would have needed a key [to access the freight entrance] or someone left it open for them,” the second source explained.

A security guard was posted in front of the jewellery business on Monday. “They said, ‘Keep us safe,’” the guard told The Post about his orders from the owner, adding that the company had no security officers protecting the premises before the robbery.

A third person who works in the building said the owner was likely “embarrassed” by the incident.

“It’s a black eye for their company. They couldn’t secure it. That money, a lot of money — it’s embarrassing.”

A police source said the owner is out of the country in India.

The jeweller specialises in coloured diamonds and imported stones, including rare yellow and pink diamonds set in pendants and necklaces worth up to $150,000 apiece. The baubles are sold at area retailers like H.L. Gross in Garden City, NY and Neves Jewelers in Woodbridge, NJ.
Posted by dubem naija blog at 1:00 pm