Nigerian arrested for force feeding a baby to death 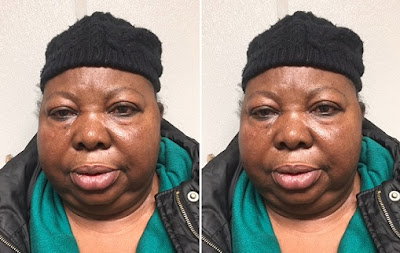 A crying baby woke up a napping nanny who then force-fed the child until the child became unresponsive and died, police said. Oluremi Oyindasola, 66, of Glenarden, Md., was arrested Tuesday and is charged with second-degree murder, first-degree child abuse resulting in death and other related charges after 8-month-old Enita Salubi died in her care, Prince George’s County police announced Wednesday.

A home surveillance system recorded Oyindasola, a live-in nanny, napping on the couch of a Glenarden home when she was disturbed by the crying child, who came up to her in a toddler walker, according to police charging documents.


Oyindasola tried to feed the child while she was still in the walker but was unsuccessful, police said.

Oyindasola then pulled the child from the walker, held the baby around the child’s chest, removed the nipple from the baby’s bottle and “proceeded to pour a large amount of white liquid directly inside the victim’s mouth,” police charging documents state.

For 25 seconds, the child “appeared to squirm and aggressively resist as the defendant continued to force a large amount of liquid inside her mouth,” records state.

After the first bottled was drained, Oyindasola then forced the child to consume the contents of a second bottle.

During the feedings the baby “displayed difficulty breathing and signs of medical distress,” records state.

After the second bottle, the child became unresponsive and at about 4:10 p.m. was rushed to the hospital and pronounced dead.

Relatives of the baby declined to comment when a reporter knocked on the door of an address listed for both the nanny and the child.

It is unclear whether Oyindasola has an attorney, and her family could not be reached for comment.
Oyindasola is in custody of the Prince George’s County Department of Corrections.
Posted by dubem naija blog at 12:10 pm