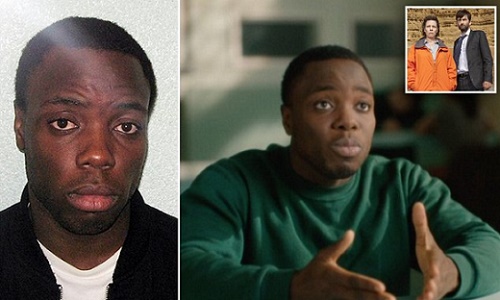 Actor Nyakeh Kpaka, 26 (left), who appeared in hit TV show Broadchurch, has been jailed for eight years at Woolwich Crown Court after being convicted of three sex attacks on two women.

Kpaka, was regarded as a promising young black actor with a bright future ahead of him after appearing in a number of popular crime and detective dramas including ITV's Broadchurch where he starred alongside David Tennant and Olivia Colman, playing the criminal son of a lawyer who has been locked up for six years.
But in real life he was a 'dangerous sexual predator' who targeted lone women at parties, sexually assaulting victims while they lay sleeping, it can now be revealed.

In May 2015, Kpaka attended a house party in Blackheath, South East London where he later crept into a bed where a woman was sleeping and sexually assaulted her twice.

A second victim came forward in September last year claiming she had also been sexually assaulted by Kpaka in similar circumstances when she fell asleep at a different house party in Finsbury Park.
Posted by dubem naija blog at 2:01 pm