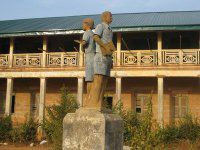 NYSC Corp members serving in Ibeku High School of Umuahia North Abia state were on Thursday attacked by some students of the school suspected to be cult members. The students had struck the Corps Members in their lodge situated within the school compound armed with cutlass and locally made guns.


The students numbering ten scaled through the fence, stealing and vandalizing properties of the corp members. The principal when contacted as when the incident was going on told the Corp Members that he was in a meeting.

Police officers who were contacted apprehend some of the students, who confessed after interrogation that scaled through the fence in an attempt to attack some male corp members serving in d school.
The case has been transferred to to the state criminal investigative department for further investigation.
Posted by dubem naija blog at 2:36 pm