Why We Sacked Stephen Keshi- NFF 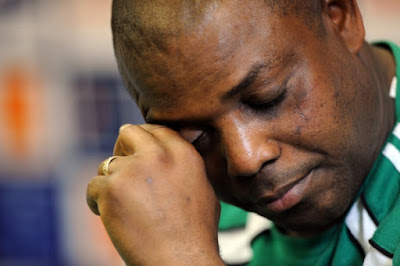 The Nigeria Football Federation (NFF) has terminated the appointment of the Super Eagles coach, Stephen Keshi. The NFF explained that Keshi failed to meet the “required commitment stated in the contract to achieve the Federation’s objectives as set out in the coach’s employment contract.


“Having thoroughly reviewed the reports/findings of the NFF Disciplinary Committee and NFF Technical and Development Committee, as well as having reviewed the actions and inactions of Mr. Stephen Keshi, in the performance of his duties as Super Eagles’ head coach, which we found to lack the required commitment to achieve the Federation’s objectives as set out in the coach’s employment contract.

“To this end, the Nigeria Football Federation has decided to exercise its option to summarily terminate the employment contract of Mr. Stephen Keshi with immediate effect”, a statement by the NFF Vice-President, Barrister Seyi Akinwunmi said.

Keshi led the Super Eagles to a 2-0 win over chad in the 2017 Africa Cup of Nations qualifier last month and has already submitted his programme for the game against Tanzania on September the 4th.

He became the first Nigerian to win the Africa Cup of Nations as captain and coach, after leading the Super Eagles to victory in the 2013 edition of competition hosted in South Africa. He also qualified Nigeria for the 2014 FIFA World Cup hosted in Brazil.

The National Technical Director, Amodu Shuaibu and Assitant Coach, Salisu Yusuf will take charge of the team until a new handler is appointed.
Posted by dubem naija blog at 7:26 pm