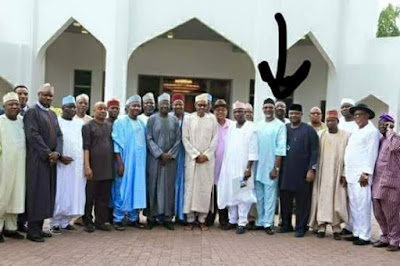 The Peoples Democratic Party (PDP) has described as worrisome and embarrassing, President Mohamadu Buhari's meeting with Ekiti State chairman of the All Progressives Congress (APC), Chief Jide Awe, in the Presidential Villa despite that he (Awe) is wanted for alleged murder in Ekiti State.


Jide Awe, who is facing murder trial over his alleged involvement in the murder of Ayo Murphy Jeje and Mrs Juliana Adewummi in Erinjiyan-Ekiti in Ekiti state in 2013, had disappeared into thin air but was sighted in Aso Villa with President Buhari in a photo-op on Friday.

State Publicity Secretary of the PDP, Jackson Adebayo said in a release issued in Ado Ekiti on Sunday that it will amount to a direct show of support for murder for President Buhari to have allowed Jide Awe into the Presidential Villa.

The statement read; "We heard that President Buhari said he is going reopen cases of political murder. Yet, the same president allowed into Aso Villa, Jide Awe, who has refused to make himself available for trial for alleged murder even after a Federal High Court in Jos vacated an interlocutory injunction preventing Jide Awe from being arrested and tried for murder.

"We frown at this open display of insensitivity to the agony of the families of those who were allegedly murdered by Jide Awe and others, and we want to believe that President Buhari was not well briefed on his (Awe) evasion of trial.

"Perhaps, President Buhari was unaware and his security details who should also know did not inform him that Jide Awe and four other members of the APC, namely Faboro John, Aniramu Basiru, Falayi Busuyi and Owonifari Sefiu were declared wanted by the police fortheir alleged involvement in the murder of two persons
in Erinjiyan-Ekiti, Ekiti State, on March 31, 2013.

"Justice A. Lewis-Allagoa of the Federal High Court in Jos had also ruled in December last year that nobody can tie the hands of the police from performing their constitutional duties, saying an earlier order he granted, restraining the arrest of Jide Awe and others, was just for a limited time.

"Since the court vacated its order restraining Jide Awe's
arrest and trial for alleged murder, he has remained a fugitive.

"It was therefore worrisome and embarrassing that sucha person could be granted access to the Presidential Villa and be allowed to take photographs with the
president."
Posted by dubem naija blog at 7:33 pm