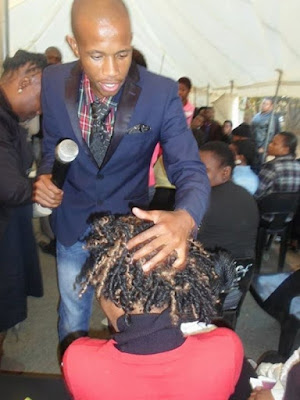 A pastor in South Africa who operates a church called End Time Disciples Ministries has performed another bizarre scene in which he purported ‘turned’ the hair of a woman into food which was consumed by church members.

The photos which were shared on Facebook in June, 2015 on the church’s page show a man placing his hand on a woman’s head and then other people are seen eating a patch of hair, supposedly, from the woman’s head.

The post says, “Man of God held the head of woman of God Thapelo from Mabopane and her hair turned into food for the sons and daughters of God to eat. Everything depends on what we say because we carry life in our tongue.”