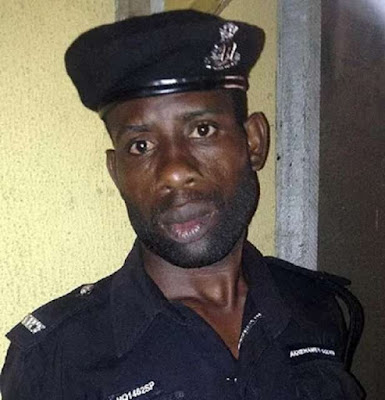 A fake police officer who has been operating in Lagos for the past 12 years was arrested when he told operatives he did not know who Solomon Arase, the IGP is. Godwin Akhenamen has fooled his friends, family, community and even himself for 12 years as he operated as a police officer. But his luck finally came to a halt when he was arrested by the Lagos State Police Command X - Squad in Ikeja, on Monday, June 6, 2015.


Seeing his bearded face and unkempt uniform, the operatives asked him who he was and he promptly identified himself as a police officer complete with an identity card. Not satisfied, an operative asked him who Solomon Arase, the Inspector General of Police, is, but to their surprise, Akhenamen replied that he does know anyone with that name and neither does he have a problem with the person.

He was promptly bundled into the Squad's vehicle and driven to the state command office where, upon interrogation, Akhenamen confessed that he has been a fake police office for the past 12 years. He even told his interrogators that he did what he due to his love for the force and has been surviving as an officer of the law » all those years.

He further confessed that he had tried to join the force about 15 years ago but was not successful since he had no primary education but that disappointment did not stop him as he borrowed money and sowed a uniform and boom, he has realised his 'dream'.

The state police has said he will soon be charged to court after investigations.
Posted by dubem naija blog at 10:51 am