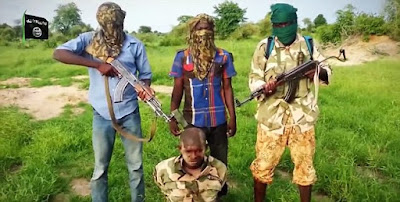 The footage bears all the hallmarks of an Islamic State propaganda video Shows Boko Haram fighters battling Nigerian troops in unknown location. Captured soldier is forced to kneel before he is shot dead and decapitated.

Boko Haram has set a terrifying new precedent by releasing its first gruesome video of a beheading since it pledged allegiance to ISIS.

The video adopts many of the same style-points as the hundreds of barbaric videos released by ISIS over the last year.

The 'west Africa' insignia in the top-left corner suggests the terror group has set up a new so-called media wing in the country.

It comes on the same day that MailOnline learned of a Somali terror group's intentions to join ISIS, which would extend its so-called caliphate to east-Africa. 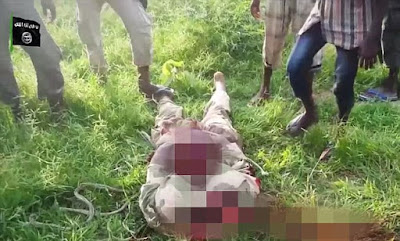 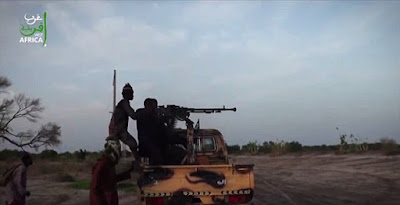 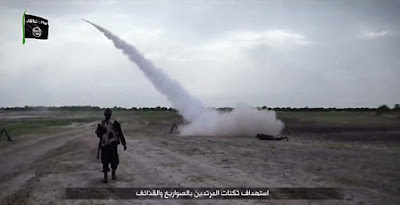 The ten minute-long propaganda video begins with what appears to be an intense firefight against Nigerian soldiers.

It shows them standing proudly next to the corpses of scorched Nigerian troops - and showing off their security badges to the camera.

The video ends with the senseless murder of a captured African Union soldier. With a look of true horror on his face, the man kneels in front of three masked Boko Haram fanatics - two of whom point AK47s at his head.

The video then cuts to reveal his decapitated body lying motionless on the floor.

Islamic State accepted a pledge of allegiance from Boko Haram, who were responsible for the deaths of over 10,000 in Nigeria in 2014, in March this year.

The audio message entitled 'kill and be killed' - released through the militants' vast social media channels - was read by an ISIS spokesperson who also threatened further violence against the Christian and Jewish communities.