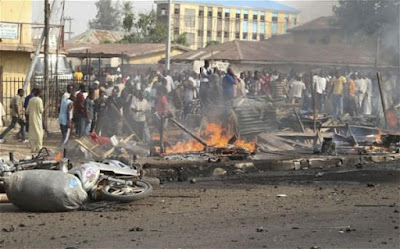 
A police officer stationed in one of the villages along the highway, told PREMIUM TIMES that travellers are being asked to return as the terrorists have taken over the road between Benisheik (a town 85km away from Maiduguri) and Ngamdu (35km away from Damaturu).

The officer, who asked that his identity be protected for security reasons, said the terrorists had attacked Ngamdu village and killed 10 persons there.

“As I am talking to you now, soldiers are moving towards Benisheik, while we are here asking motorists to return to Maiduguri until the road is cleared,” he said.
There is no security checkpoint between Benisheik and Ngamdu, which is about 25km stretch of road.