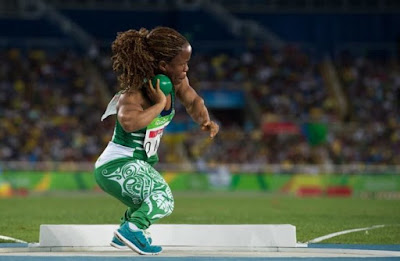 Nigeria yesterday continued its impressive form at the on-going Rio 2016 Paralympic Games when it won two more gold medals and a bronze to bring the country’s tally to five gold, two silver and a bronze medal. Powerlifting gave the country the previous medals and one of the gold medals yesterday, but athletics also came to the party with a gold in the shot put event.


Powerlifter, Ndidi Nwosu, got the country off to a good start on the day when she won gold at the women 73kg event, while Onye Lauritta won the country’s first gold medal in athletics when she took the gold in the shot put event with a new world record.

Her first throw of 7.83m bettered the former record of 7.72m. Nigeria now leads Africa’s medal haul and is ninth on the overall table.

On Sunday, Lucy Ejike set a new world record when winning the gold medal of the women’s -61kg.

The Nigerian lifted 142 kg, which gave her not just the Paralympics record, but also a new world mark.

Powerlifting has produced seven of the medals won so far by Team Nigeria at games, which ends on September 18.

Posted by dubem naija blog at 9:55 am