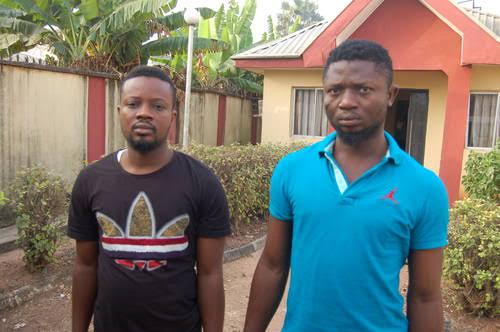 In a press statement released by EFCC Head, Media & Publicity, Wilson Uwujaren, The Economic and Financial Crimes Commission, EFCC, on Tuesday December 15, 2015, arraigned Aigbe Joseph (alias Anthony Styler Malan) and Dennis Igbinoba (aka David Clark, Engr. Phil Anderson, Engr. Tim Hilton, Engr. Williams Clark) before Justice A. M Liman of the Federal High Court, sitting in Benin, Edo State on separate count charges bordering on Internet fraud and obtaining money by false pretence.
Joseph and Dennis were arrested in Benin City, Edo State following intelligence report on their involvement in internet scams. Laptop computers and phones were recovered from their homes
during a search by EFCC operatives. In his confessional statement, Joseph said he had been involved in several internet fraud and collected the sum of ($50,000) Fifty Thousand United State Dollars from one Destiny, an America citizen.

He stated further that he used part of the money to buy a Toyota Camry car, and also rented an apartment. Dennis, the second defendant, revealed that he chats with foreign women on social media platforms (facebook/yahoo mail) while posing as a white Civil Engineer resident in London. Joseph and Dennis pleaded not guilty to the two and four counts of fraud preferred against them, respectively. One of the counts reads:

“That you Aigbe A. Joseph, sometime between 2014 and 2015 in Benin City, Edo State within the jurisdiction of this Honorable court did with intent to defraud attempt to obtain the sum of Twenty Thousand Dollars from Savita Shamsunder as Anthony Styler Malan, that the money is for your tax clearance for a construction job in France, facts which you knew or ought to know are false and thereby committed an offence contrary to Section 1 (1) (b) and read together with Section 9 (2) both of the Advance Fee Fraud and Other Fraud Related Offences Act, 2006 and Punishable under Section 1 (3) of the same Act”.

Justice Liman, granted the defendants bail in the sum of N1million each and one surety in like sum. Surety must have also have landed property within the jurisdiction of the honorable court. The matter has adjourned to February 17 and 18, 2016 for the commencement of trial.