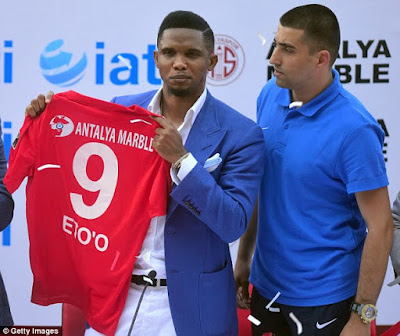 Former Barcelona, Chelsea, Inter Milan and Everton Striker has been appointed coach of Turkish side Antalyaspor, after the departure of head coach Yusuf Simsek. Cameroon legend Samuel Eto'o Fils who joined the club in June on a three year deal was told by the club's president to take over coaching duties with with technical director Mehmet Ugurlu until a new coach is hired.

"We sat down with [technical director] Mehmet Ugurlu and Eto'o. Both will jointly coordinate training. The board commissioned Ugurlu and Eto'o to assume coaching duties until a new coach is found," club president Gultekin Gencer told DHA.

With his new found role, Eto'o will combine his coaching duties with playing for the club. Eto’o is currently the Super Lig’s leading scorer, grabbing 13 goals in his first 15 matches with Antalyaspor. The club has given the striker three matches to prove himself, and will then re-evaluate the situation after the league’s winter break.

In 2005, Eto’o finished third in the voting for FIFA World Player of the Year, and has been named African Player of the Year a record four times. He won the Cup of Nations twice, and is the tournament’s all-time leading goalscorer.

The top scorer for the Cameroon national team, Eto’o competed in four World Cups and six African Cup of Nations.
Posted by dubem naija blog at 11:03 am