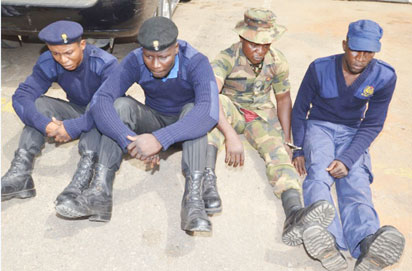 Fake naval personnels and a soldier were weekend arrested by Lagos state Police command for alleged armed robbery. The suspects who were all in military attires were arrested by youths at Ilado area of Lagos state while they were fleeing in a canoe after escaping from police detention and handed over to Ilado Police post, near the Ajakoyi Beach.

A resident, Wasiu Omojola, who narrated the incident to Vanguard said: “We are predominantly fishermen but some of us do oil business. The military personnel used to come to extort money from us daily. We didn’t even know that they were fake officers.They would come in military uniform.

Their leader whom we later realized is an Army Sergeant would dress as an Army Lieutenant Commander. He would gather us and warn that the Army High Command had sent him on a special duty.

“He told us that his group was on Joint Military operation. He then instructed us to contribute N2 millon for his boss. We were able to raise N500,000. The following day, they prevented us from doing our job, so we had to contribute another N300,000.They still said it was not yet okay with them.

Wasiu Omojola added: “I don’t know how one of us reported the development to Army authorities who said that they didn’t send any team for joint military patrol to our area. When we got the information, we now mobilized against the self- acclaimed joint military patrol.

“When they arrived the following day to resume their extortion, we arrested them. They did not believe it when we took them to the Police.

We were later informed by the same Police that the suspects escaped from their cell, so we mobilized again and gave them a hot chase. We later arrested them and brought them to SARS.”

Police sources said the Nigerian Army has confirmed that the man who claimed to be a Lieutenant is a Sergeant.  “The Army has taken him for court-martial but we have written to the Army that after the court – martial, the man should be brought back to the Police for proper prosecution.”

One of the suspects simply identified as Oche said:  “Well, there is no job in the country. My friend who is an Army Sergeant brought the idea of going to collect money from those doing illegal oil businesses. The sergeant provided me with the uniform that I am putting on now. I don’t know about others.

Sergeant is the one sharing our loot. I got N50,000 three times but I could not believe it when we were arrested.

Commissioner of Police, Lagos State command, Mr. Fatai Owoseni, said the suspects were rescued from the hands of an angry mob that attempted to lynch them.

“They were robbing people of their belongings. The people were attempting to lynch them when the Police stormed the place and rescued them. The sum of N380,000 was recovered from the suspect.”
Posted by dubem naija blog at 4:31 pm