They beat him up before shooting him dead; More details on murder of Jumia delivery man 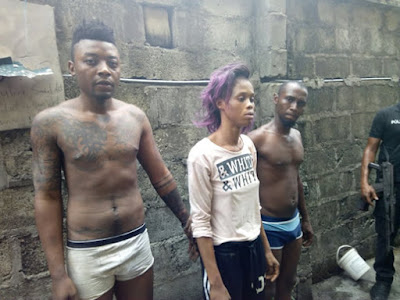 A delivery man with an online marketing store, Jumia, Mr. Chukwuma Eleje, has been killed in a house on Ada George Road, Port Harcourt, Rivers State. The victim was said to be delivering two iPhones to some customers, who had ordered for them through the Internet on Saturday, when he was attacked and killed. The assailants were reported to have dumped his remains in a septic tank in a desperate attempt to cover up the crime.
However, operatives of the Special Anti-Robbery Squad were said to have been alerted by residents. The officials were reported to have swooped on the suspects in their apartment on Monday.

The state police spokesperson, DSP Nnamdi Omoni, who confirmed the incident, said the suspects – Sodienye Mbatumukeke, Excel Naabe, and Joy Eluwa – upon their arrest, confessed to the crime.

Eluwa was said to be Mbatumukeke’s girlfriend.


“Operatives of SARS, acting on credible intelligence on Monday, at about 3am arrested three suspects– two males and a female–  identified as Sodienye Mbatumukeke, Excel Divine Naabe, and Joy Eluwa.
“These armed robbers ordered smartphones from a certain courier company in Rivers State. Then the company sent the phones through a dispatch rider. On getting there, the hoodlums beat up the dispatch rider and later shot him; he died inside their flat.
“After killing him, they threw his corpse into a septic tank. Our men, who were acting on credible intelligence, arrested the suspects and they showed us where they hid the corpse.”

Omoni added that the state Commissioner of Police, Zaki Ahmed, who led other senior police officers to the scene, appealed to members of the public to always share information with the police.The two prime suspects, however, passed the bulk to each other.

Naabe, who claimed to be on a visit, said he saw Mbatumukeke pushing the deceased into the septic tank. 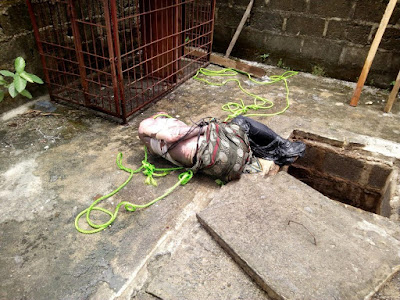 
“On my way to this place, I saw him (Mbatumukeke); he was packaging something like a black waste bin. He was saying I should just go inside and chill out. He said he would soon join me in the room.
“I overheard some neighbours asking him what he was doing close to the septic tank and he gave them an excuse. I went inside and saw bloodstains in the bathroom.
“When I queried him, he brought out a gun and pointed it at me, saying if I uttered a word about what I saw, he would kill all my family members.”


The second suspect, Mbatumukeke, claimed that Naabe killed the victim, adding that he hit the courier man with an iron on the head.

“He hit him with iron on the head and blood was gushing out. I was afraid; I was vibrating. I didn’t know what to do. God is my witness,” he added.

When one of Punch's correspondents visited the scene on Tuesday, he observed that the house was deserted. 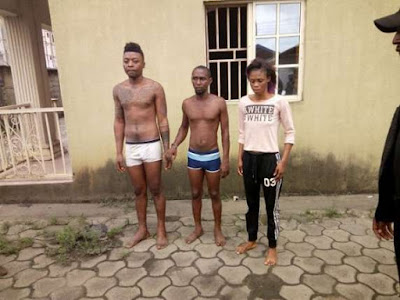 It was gathered that most of the tenants in the building began to leave the house after policemen recovered the corpse.

An official of Jumia, Mr. Naze Paul, told PUNCH Metro in a telephone chat that the throat of the victim was slit.

Paul, who works at the Customer Care Section of Jumia in Port Harcourt, described the late Eleje as a good worker.

He said, “Instead of them to say they don’t have money for the items, they cornered and killed him. “I believe they are cult members. Now, before we deliver goods we will get money first. “If we don’t get paid first, we will not deliver.  What caused this nonsense is that we deliver before getting paid. The agent they killed was a good worker.”

Punch
Posted by dubem naija blog at 8:58 am