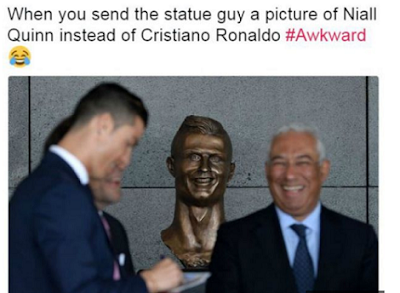 Football fans have been questioning the resemblance of a statue of Cristiano Ronaldo unveiled on the Portuguese island of Madeira. Many on social media say the work looks more like former Republic of Ireland captain Niall Quinn than Ronaldo. The statue was revealed at a ceremony to name the island's airport after him.
Portugal's president and the prime minister flew to the island to unveil the tribute to the player outside the terminal entrance.

President Rebelo de Sousa said Ronaldo "projects Madeira and Portugal across the world far more than anybody else".

The 32-year-old is a local hero in Madeira, where he is seen as a rags-to-riches success. He already has a museum about him in his hometown of Funchal.

The player later said on Twitter: "Happy and honored to have my name given to the Madeira airport!"
Posted by dubem naija blog at 10:28 am