Burglar gets stuck on fence with his trousers down 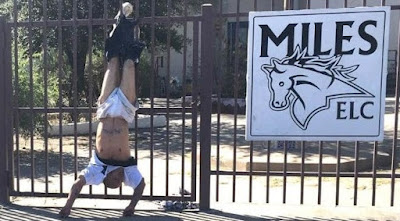 A suspected thief was reportedly arrested in Tucson, Arizona, on Friday after he was spotted in a rather unusual position: dangling from a fence by his trousers. Witnesses said the hapless fellow had been seen trying to open some doors at Miles Elementary School at around 10.30 on Friday morning. There were no pupils on site at the time due to the school being on holiday.


When the man realised he'd been spotted, witnesses say he tried to clamber over the school's spiked fence - but slipped, snagged his trousers on the fence, and ended up hanging upside-down on the

fence with his trousers at half mast.

Passerby Jesse Sensibar saw him hanging there and took a photo, which he later uploaded to Facebook saying: "One more reason not to jump fences in baggy pants. "I saw this homie hanging around at the Miles School this morning when I was rolling eastbound on Broadway Avenue. I was going to help him off the fence but by the time I got back around the block the cops were rolling up two cars deep.

"I don't know what his story was but it must not have been good enough, fifteen minutes later when I went back by the other direction going home he was cuffed up in the backseat. He smiled for the camera."
Posted by dubem naija blog at 9:12 am