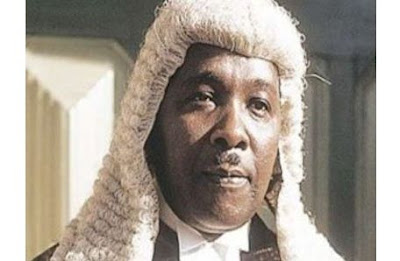 The office of the Attorney General of the Federation (AGF) has accused Justice Adeniyi Ademola of the Federal High Court of accepting an N8m car as gratification from a lawyer, Joe Odey Agi. Justice Ademola, 63, allegedly accepted “a BMW saloon 320i, valued at N8m” from him through his son, Ademide Ademola. He is also accused of attempting to obtain N25m gratification from Sani Shaibu Teidi with a view to showing him [judgement] favour.


According to The Nation, Teidi, a former director, Pension Accounts Office, Head of Civil Service of the Federation, was charged before the judge in 2013 with alleged involvement in a pension scam.

The allegations are contained in a fresh charge filed against Justice Ademola and his wife, Olabowale by the office of the AGF.

The AGF accused the wife of accepting N30m on behalf of her husband from a law firm known as Messrs Joe Agi and Associates.

Mrs. Ademola is accused in counts two, three and four of receiving N10m gratification thrice from Messrs Joe Agi and Associates through her GTBank account on behalf of her husband between March 11 and 24, 2015, an offence contrary to Section 8(1)(a) of Corrupt Practices and other related offences Act 2000.

Justice Ademola is accused in counts five and six of “dealing with property subject matter of an offence” by transferring N85m and N90m on February 24, 2014, through his account 286/174191/2/0 in GTBank to Franco Dan Parker, “which forms the proceeds of an unlawful act and thereby committed an offence contrary to Corrupt Practices and other related offences Act 2000.

The judge is accused in count seven of attempting, on February 21, 2014, to obtain gratification of N25m from Sani Shaibu Teidi “as a motive for showing favour in the exercise of your official functions, contrary to Section 118(b) of the Penal Code Act”.

He is in count eight accused of receiving gratification of “a BMW saloon 320i, valued at N8m from Joe Odey Agi, through your son, Ademide Ademola, an act contrary to Section 8(1)(a) of the Corrupt Practices and other related offences Act, 2000.

In count nine, 10 and 11, the judge is accused of illegally possessing firearms and ammunition (one Avar Magnum 608, Avar Magnum 6284) and 35 rounds of live ammunition (catridges) without valid licences an offence contrary to Section 3 of the Robbery and Firearms (Special provisions) Act 2004.
The planned arraignment of the couple before a High Court of the Federal Capital Territory (FCT) in Maitama was stalled yesterday, owing to the inability of the prosecution to effect service of the charge on the defendants.

When the case was called, the Director of Public Prosecution of the Federation (DPPF), Mohammed Umar, told the court that in exercising his powers under Section 174 of the Constitution, and Section 104 of the Administration of Criminal Justice Act (ACJA), the AGF has instructed that a private lawyer, Segun Jegede lead the prosecution of the case.

Jegede is a former prosecutor at the International criminal court (ICC), brought in to nail big looters.
Posted by dubem naija blog at 1:37 pm