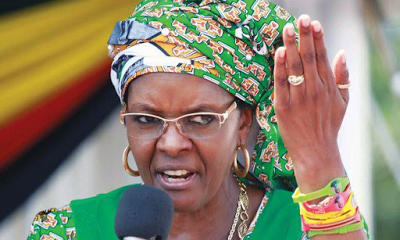 Zimbabwean first lady Grace Mugabe has declared herself the new president that would take over when Robert Mugabe finally steps down. Grace Mugabe said to the ruling Zanu-PF party women’s league that she is already the president, as she has made plans and arrangement with President Robert Mugabe”.

Grace’s announcement comes after the President announced that he is working towards his retirement as the president.

Mugabe made the shocking announcement to veterans, who came to solidify their support for him. There, he admitted that Zimbabwe is apparently in a financial crisis – which spells doom for the citizens and the country at large.

“The First Lady said ‘I’m the wife of the president, I’m the president already … I plan and do everything with the president, what more do I want, for now the position of the women boss is enough,” Muchemeyi was quoted as saying. Zimbabwe’s deputy president, however, noted that the first lady’s ambition to lead the country after her husband’s departure, had been “put on hold” after the Mashonaland West Zanu-PF women’s league said the issue of quota system in the presidium should be avoided.

Grace’s new announcement also raised concern that she still influences the president’s decisions, especially in policies that affect the country. Months back, Mugabe himself admitted to being ‘told what to do’ by Grace who forced him to prematurely end his speech during the Zanu PF National Conference in Victoria Falls last year.

“Mukadzi uyu akutondinyorera kuti ndavakutaurisa (she is writing to me, saying “I’m talking to much). Ndozvandinoitwa kumba (this is what she does at home). Saka ndoteerera (So I listen),” Mugabe ashamedly admitted to his wife’s rule. Read Also: Zimbabwe Is Dead-broke But Is Losing $1 Billion To Corruption Every Year Mashonaland West women’s league chairperson, Angeline Muchemeyi told a gathering over the weekend that Grace was already running State affairs and would not fight for lesser positions like the vice president’s post.

“Grace told an executive meeting that she is ‘already the President’ and would not want to be appointed VP, as it was a lower post,” she said, reiterating that Grace Mugabe is making serious plans to take over as soon as Mugabe steps down.
Posted by dubem naija blog at 5:01 pm