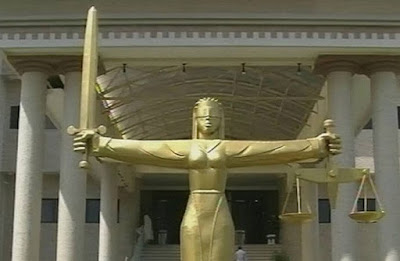 A Gudu Upper Area Court in the FCT on Friday sentenced a 25-year-old man,Obioma Ozokwe, to seven strokes of cane and cleaning of court toilet for stealing N250,000 worth of cables. Ozokwe pleaded guilty and was convicted on a two-count charge of criminal trespass and theft. The Upper Area court judge, Mr Umar Kagarko, cautioned the convict to desist from a life of crime and to learn a trade.


The Prosecutor, Mr Gabriel Ayana, had told the court that Gbenga Agani of Apo Resettlement reported the matter at Apo Police Station on Oct. 24.

Ayana said that the complainant reported that Ozokwe trespassed into his building site and stole armoured cables valued N250,000.

“The cables belonged to the residents of the area who kept them in the site for safety,’’ Ayana said.

The trial judge, Justice Abbas Bawale, convicted Umar after he was found guilty of unlawfully having carnal knowledge of one Salima Nuhu of the same address on April 13, 2014. Umar is from Ketare village in Kankara Loca Government Area of Katsina State.

Delivering judgment, Bawale said the prosecution had successfully established the charge beyond reasonable doubt as required by law.

The judge, however, said he had taken into the consideration the ill health of the convict, being a cancer patient in his judgment.

He said the punishment for the offence under section 283 of the penal code law attracted a maximum sentence of life imprisonment.

The judge said the lead prosecution Counsel, Mr Aminu Garba, had led four witnesses and three exhibits, including the medical report on the victim.

He sentenced the convict to 10 years imprisonment without option of fine to serve as deterrent to others. The convict, who was not represented by a counsel, defended himself during the trial.
The convict had lured the 13-year-old into his house on the pretext of buying mangos from her and forcefully had sexual intercourse with her. The case was first mentioned on Dec. 17, 2015.

He also said that during police investigations, the stolen armoured cables were recovered in the convict’s possession. The prosecutor said the offence contravened sections 348 and 251 of the Penal Code.