Man cuts off pregnant ex-girlfriend's nipples with scissors, stuffs blanket into her mouth 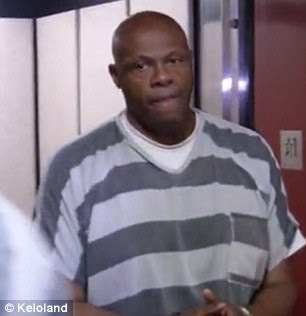 A 45-year-old man has been arrested after allegedly cutting off his pregnant girlfriend's nipples. Tony Ledbetter from Sioux Falls, South Dakota, is facing eight charges of aggravated assault. Police allege he beat the 39-year-old woman repeatedly, slamming her head on the ground before trying to silence her screams by shoving a blanket in to her mouth.
At some point during the attack, he is accused of going to find a pair of scissors which he used to then mutilate her breasts. The woman, who has not been named, was able to escape and ask for help, Keloland reports.

Ledbetter, whose bond has been set at $250,000, called 911 himself to report the incident. Sioux Falls Public Information Officer Sam Clemens described the case as 'disturbing'.
Posted by dubem naija blog at 12:40 pm