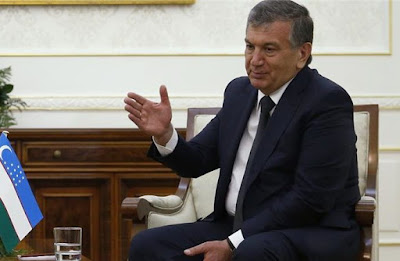 
Under the Uzbek constitution, a presidential election must be held within three months, and Mirziyoyev, who was the official mourner-in-chief at Karimov’s funeral, is widely expected to be elected.

Karimov died of a stroke last week after ruling the resource-rich country for 27 years. Nearly half of the country’s 32 million citizens were born after he came to power.

Many analysts had anticipated that Karimov would be succeeded by his older daughter Gulnara, a businesswoman and pop star, but she fell from favour two years ago and there was no sign of her on Saturday among the family members in the funeral cortege.

With no obvious successor, Karimov’s death has triggered an outpouring of grief, mixed with uncertainty about the future.

Unrest would have repercussions for Russia, the regional power and home to hundreds of thousands of Uzbek migrant workers, and for the US-allied government in Afghanistan.

The Uzbek government has long been repeatedly criticised for human rights abuses, most notoriously in 2005 in the city of Andijan, where government forces are accused of killing hundreds of demonstrators.