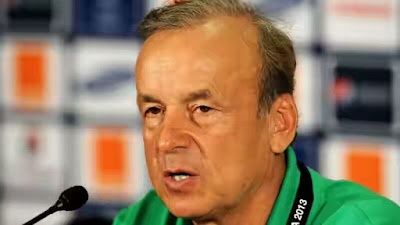 Super Eagles coach Gernot Rohr has rejected a three-bedroom provided for him in Abuja by the Nigeria Football Federation (NFF), saying it is “too big”. The 63-year-old Rohr, who is married to an African, has inspected the three-bedroom property in Jabi, but has now told officials he could do with a much smaller apartment.

An official accommodation is part of the benefits captured in the two-year contract the Franco-German has signed to qualify Nigeria to the 2018 World Cup.

Already, the NFF have moved fast to also provide an official car for the former Gabon and Burkina Faso coach.

The official car first purchased to be used by Sunday Oliseh is now being fixed after it was used by Olympic team handler Samson Siasia beyond his time in temporary charge of the Eagles for the AFCON 2017 qualifiers against Egypt in March.

Rohr is on a $47,000 a month and this salary is being bankrolled by a mystery sponsor.
Posted by dubem naija blog at 9:33 am