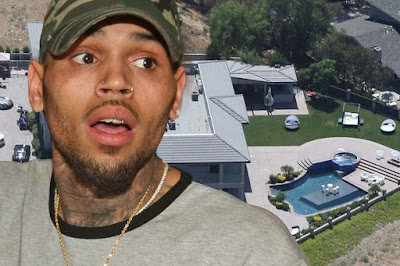 Following his arrest last week for gun assault charges, Chris Brown has banned guests from his mansion.There is also a strict no alcohol an drugs policy. This comes after the 27-year-old singer has maintained his innocence after being accused of pulling a gun on former beauty queen Baylee Curan during a row at his home.
According to TMZ, the star will now enforce a strict guest policy at the Calabasas property with no "randoms" allowed - while his best friends and roommates will have to submit a list for approval. As well as the written notice of potential guests - which will reportedly include descriptions so he can make an informed decision - those who pass the test are said to be banned from bringing in their own drugs or alcohol.
It was alleged text messages from this accusers phone showed she promised to set him up for throwing her out of his house.One allegedly read


"This freak Chris Brown is kicking me out of his house because I called his friends jewelry fake. I'm going to set him up and call the cops and say that he tried to shoot me and that will teach him a lesson I'm going to set his ass up."


"I cannot wait till the truth comes to light about this incident and this situation.
"You know, because my character's been defaced and who I am as a person and [my] integrity. I'm glad all my real supporters know me, and know the truth and see the truth."