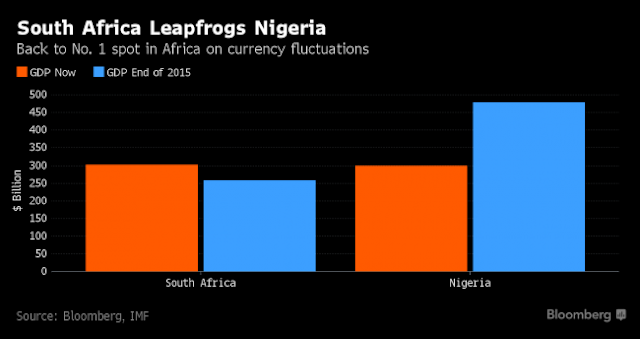 South Africa has overtaken Nigeria to become the biggest economy on the African continent..
According to Bloomberg ,using the gross domestic product at the end of 2015 published by the International Monetary Fund,the size of South Africa’s economy is $301 billion at the rand’s current exchange rate, while Nigeria’s GDP is $296 billion.

Bloomberg noted that the rand has gained more than 16% against the US currency since the start of 2016, while in contrast, Nigeria’s naira has lost more than a third of its value. In Afternoon trade on Wednesday, the rand firmed by more than a percent against the dollar, to R13.29.
Posted by dubem naija blog at 12:26 pm